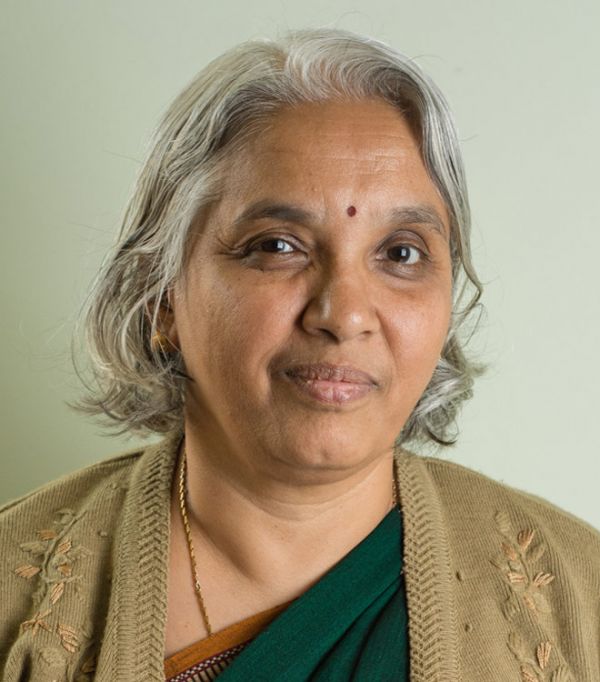 Two days later, early Tuesday morning, I heard a voice in my room - I couldn’t tell if it was a dream or if I was awake. I heard the words in my mother tongue “Today the Holy Spirit will descend on you”

My parents were raised in a large family in a typical Brahmin (priestly caste) tradition. Unlike them, I was raised in a liberal environment because my parents did not practice Hindu rituals at home. Still, lighting a candle and saying a prayer was part of our daily devotion.

My father once told me that I should read the Bible sometime in my life. In January 2011, I began reading the Gospel of Matthew. It was the month in which my contract for a job in Germany expired. Every day at 8:15 I would read one chapter, and before that yesterday’s chapter. At the end of January, I realized that I had experienced Christ in a completely different way - firm and gentle, he answered with the truth and took away every weakness.

As I had become unemployed after ten years, his words gave me faith. I read in Matthew 6: 25-27: “Therefore I tell you, do not be anxious about your life, what you will eat or what you will drink, nor about your body, what you will put on. Is not life more than food, and the body more than clothing? Look at the birds of the air: they neither sow nor reap nor gather into barns, and yet your heavenly Father feeds them. Are you not of more value than they? And which of you by being anxious can add a single hour to his span of life?”

After the gospel of Matthew, I didn’t read further. It took me a while to absorb what I read. In April 2011, a colleague from my former job invited me to go with her to a church service on Good Friday in Münster.

The central theme of the sermon was the cross. When I got home I meditated on the subject of the cross as Pastor Thomas Kruehler had instructed us. At the time, I was upset about my mother’s poor health (81). She was supposed to return to Germany after being in India for a few months. Her visa, finances - everything was questionable. As her only living child at the time, I couldn't refuse her, but I didn't even know how we would live if she moved in.

One Saturday morning I told God (I always called on him even though I didn’t know him) that I didn’t know what I should do and that I could never know if I was doing more harm than good, even with the best of intentions. In prayer, I told him I’d give up my right to determine what is good and what is bad.

That prayer was a turning point. After that, various miracles started happening in my life and they still happen. The next day I went to the Easter service and participated in the Eucharist as a believer. Faith is a wonderful gift that comes from God!

Two days later, early Tuesday morning, I heard a voice in my room - I couldn’t tell if it was a dream or I was awake. I heard the words in my mother tongue "Today the Holy Spirit will come upon you." Until then, I knew nothing about the Holy Spirit.

On Easter, it had been announced that on Tuesday, Pastor Thomas would be available in a downtown cafe for “Nicodemus Hour” from 10 p.m. I wanted to go, but I wasn’t used to going out so late. With a lot of discomfort, I decided to go because I desperately wanted to be in the company of brothers and sisters in Christ.

Pastor Thomas was alone and asked me what I wanted to know. After Saturday I believed in Christ and His cross but I had three more questions that bothered me. In Hinduism, God lives in us - why are we all sinners in Christianity? If we are not perfect how do we understand the new birth and salvation? And, finally, why do people in Western, so-called Christian, society live with such low moral standards?

Thomas answered me from the Bible. He explained to me what sin is, what being born again means and told me about Nicodemus, and how God gives us a new birth - of Spirit and fire.

He instructed me to look at faith as a personal journey and to follow Christ without burdening myself with Christianity as an institution.

He then told me his life testimony. He then prayed for me and asked me if I wanted to give my life to Jesus. I had received gentle and precise answers to all my questions. I said “yes”.

As we prayed I felt as though immersed in a cloud of smoke. I knew I had come home. Although I could not understand what it was that I had received, by God's grace I accepted it.

After that I suffered and struggled with different things. I regretted having to abandon pious literature and music based on Hindu philosophy ... But I felt the constant presence of Jesus and the Holy Spirit. They showed me things and drove unnecessary thoughts and worries away from me.

During this phase, I began to see the power of prayer, seeking forgiveness, and bringing different feelings, sinful thoughts, and deeds to the cross. I felt liberated and blessed. Complete joy in Jesus came only after my baptism in June 2013.

I didn’t want to talk to my family much about faith or read the Bible so as not to arouse resistance and rejection in them, but the Holy Spirit guided me and gave me the right words and attitude. I felt like my whole family was impressed by the changes they saw in me. One by one, both my parents, two children and my ex-husband accepted Jesus. In June 2015, Dilip and I remarried and soon moved to Zagreb, where I am currently working on a research project at the Ruđer Bošković Institute.

One of the verses that particularly encourages me is from Proverbs 3: 5-6:  “Trust in the Lord with all your heart, and do not lean on your own understanding. In all your ways acknowledge him, and he will make straight your paths.”

We care about your privacy. You can unsubscribe at any time.